*Site contains affiliate links - please see our full disclosure for more info & thanks for your support!

The Monopoly game’s origin in 1935, started out when Charles Darrow drew a game board on a round piece of oilcloth that he had in his closet. His friends and family enjoyed the game, so he began to sell copies of the game for $4.00 each – an expensive cost for those days. 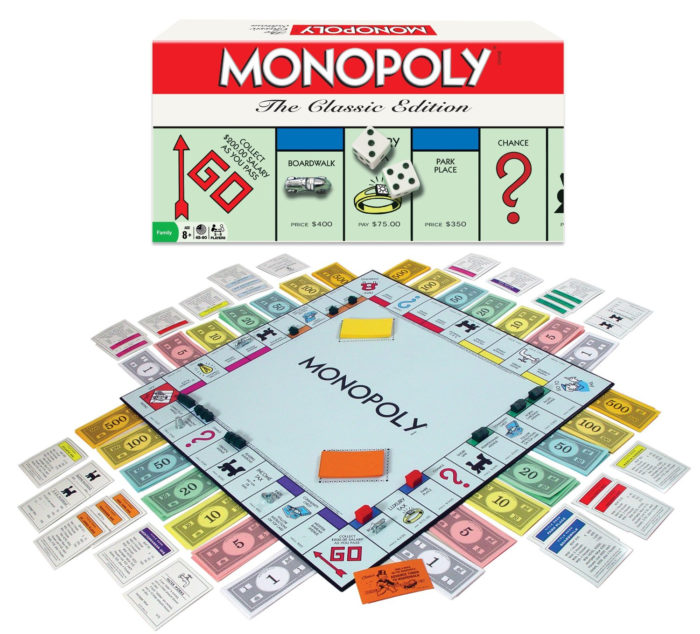 When Charles was eventually getting up to 10 orders a day (all the games were hand-made), his life ended up revolving around collecting games. When he first presented it to Parker Brothers, they complained that the game took way too long and there were 52 errors reported. Eventually they accepted, however, and Charles would receive a royalty for every game sold.

Parker Brothers did re-write the rules for added clarity and change the board to the modern square shape, and eventually also added Monopoly mascot Mr. Monopoly.  Now, the Monopoly game includes the new speed die, a partially newly-designed board, a few new tokens, and even more features to make the game very exciting!

The rules are often argued upon, so here are the distinct features and rules of the game.
1.  Decide one player to be banker.

This player shall be in charge of all money, property, houses and hotels still belonging to the bank. Remember that the chosen banker may also be a player in the game, but he must keep his assets as a player separate from that of the bank’s.
2.  Choose a token.

Each player will get a mover to represent themselves as they move around the board.
3.  Start with $1500.

Each player will begin the game with $1500 divided as follows:

4.  To decide who goes first – have each player roll the dice. Whoever rolls the highest number goes first, and play then continues clockwise around the board.

If you roll doubles during the game, that is, the same number shown on both of the dice, you may take your turn as normal then take another turn.

5.  Buy property. If you land on a spot with a colored stripe across the top, a railroad or a utility (Electric Company/Water Works), you may buy the property for the amount printed on the board. The banker in turn gives the player the title deed for that property.

6.  Collect rent. Players who own property may collect rent when another player lands on a property that someone else owns. If you land on someone else’s property, you must pay them the rent printed on the title deed card for that property.

Get a Monopoly – If you own all the properties in a colored group, you may charge double the rent for those properties.

8.  Take a Chance or Community Chest card. These cards may make you pay or collect money, or make you move to another space. If you land on a spot marked “Chance” or “Community Chest”, take the top card off of the corresponding deck of the space that you landed on. When you’re done reading the card, return it to the bottom of the corresponding deck.

There are three possible ways to go to jail:

10.  Get out of jail by doing one of the following:

11.  At any time, two players can trade money or property, if both players agree to the trade.
12.  Mortgage property – If at some stage a person has to pay rent of more money than they own they can mortgage their houses and get the money from the bank. When a house is mortgaged, not rent can be collected. To un-mortgage a house you must pay 10% interest when you pay it off.
13.  Go bankrupt – If you owe more money than you and your assets can afford, you’re declared bankrupt and are out of the game. Last player standing wins!
14.  Tips

Monopoly is a game that is known for taking a while, but it is also fine to play over several sittings as long as you remember who has what!